June 19, 2013
Two years have passed (with the original reflection coming from 2009, a total of four years) and yet the story keeps on evolving into different forms. Reflecting again on this with the news we have received from yesterday (Embassy execs linked to sex ring ordered back to Manila for probe)

I believe women are not slaves. But recently I've reflected that some choose to become one, whether it be a slave of the flesh or desire to get what they want/need... while most women fall victims to predators (those who view women as the "weaker" gender).

Talking with a foreigner friend one day, he admitted to using "free" pornographic sites and told me that he was surprised to see some Filipinas willing to bare before the webcam.

Judging from the tone of his voice, he was expecting "us" to be quite different from the others. he added too, that the recent trend today is to marry a foreigner (especially from Europe/US) to ensure one's future.

His comments made me indignant. I defended our race even if there were traces of truth in between his lines... no washing of hands...

Years back, working as a volunteer assisting street children in a day care center, I had some followed-up through family visits and I rankled that it was their very own parents who put their children in sex dens... and pushed them to sell drugs...

Yes, more often than not, we choose to become slaves because we find no other way out --- have we turned into masochists in that sense? or have we lost our sense of creativity preferring easy money to hard work (which, sad to say, is happening... since work is not available).

In the sixth grade, we were taught to criticize advertisements we see on TV, magazines and posters (and now we have the Internet). Our society has trained men's eyes to view women as sex objects, seducers, temptresses, sirens, forms of entertainment/amusement (young women donning "super" micro miniskirts/bikinis on noontime shows? ads/photos of everything we could ever think of --- to sell ourselves? or the products?).

Discussing this with artist friends, I asked where the line is drawn between pornography and nude art (drawings, paintings, photos, movies, theaters, videos) and sculptures... our beautiful human figures form part of God's creation was the answer...

Art evokes beauty, profundity and creativity... Pornography is a product of idleness and superficiality... Art enables people to think and react... Pornography turns people into spectators and passive receivers...

What lie in the hearts of idle minds? Crimes.

Children are caught in between becoming victims of our own making (look at the long list of rape, kidnap, child prostitution and pedophilia victims). And men would argue, but it's what they deserve for seducing us... for wearing 'sexy clothes'... (for not wearing anything at all)... and women, why?... And so the chain of slavery goes on. 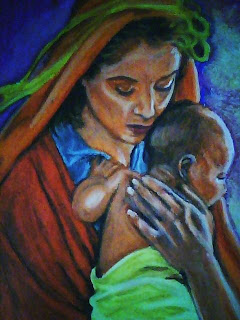 I have a stronger belief and that is WOMEN HAVE VOICES and are capable of rising above the "existing perceptions" of the society we live in. I believe that if we CHOOSE to break the chains and say STOP to violence, we could make a difference.

Going abroad to seek greener pastures is understandable although not laudable. Women leave their children and the family suffers a great deal. Falling as victims in a foreign land is painful. "We are NOT animals... we are HUMANS" and thus we deserve to be treated equally and share fair terms.

The battle has started with the support groups that we have. Let us not grow into extremes and form hate groups. We are here to seek justice and I agree that we need a higher influence (from the government) who could pass a law against human trafficking and all sorts of violation against women and children.

WOMEN should be the first to say NO to all acts/forms of slavery.

Most High, Glorious God,
enlighten the darkness of our minds.
Give us a right faith, a firm hope and a perfect charity,
so that we may always and in all things act according to Your Holy Will. Amen.

Melissa Tandoc
Philippines
LOVE ~ everything is in there... my heart, my life, my breath, my soul ~ everything I am and should be in God's grace.

Pray Liturgy of the Hours at Breviary Hymns

Find out more about me at:
Vishnu's Virtues ~ click here

We Have A Story Posts